The answer to the long debated question of whether social media has any impact on SEO is finally here. After running a month-long experiment on our own social posts, we determined there is a positive correlation between social engagements and change in rank.

Can social media help with SEO? Before we answer that question, a quick glossary of common search engine optimization terms for readers who may not be SEO experts.

The question of whether social media has any impact on SEO has been long debated. In 2010, both Google and Bing admitted to using social signals to help rank pages within their results. Four years later, that stance changed after Twitter temporarily blocked Google’s access to their social network. In 2014, Google’s former head of webspam, Matt Cutts, released a video explaining how Google can’t rely on signals that might not be there tomorrow.

That’s where the conversation stopped. Since 2014, Google has publicly denied that social has any direct affect on rankings.

But now it’s 2018. A lot has changed over the past four years. One noteworthy shift is that social networks started appearing in search engines at a much larger scale.

Facebook URLs ranking within the top 100 in Google.com (U.S.)

Twitter URLs ranking within the top 100 in Google.com (U.S.)

Notice the exponential growth of Facebook and Twitter pages making their way into Google’s results? Well we did, and thought it was time to analyze the relationship between SEO and social media with a series of tests.

Say hello to “Project Elephant,” an experiment named for the ‘elephant in the room.’ The elephant in this case being the long-asked-but-never-answered question: can social media help improve search rank?

How we structured our experiment

We organized our content—blog articles, for the purposes of this experiment—into three groups:

To simplify the number of data points, we chose to run this first test on Twitter and built out a publishing schedule to keep ourselves on track.

But before launching the test, we needed to level the playing field. So, for a full week prior to the launch, none of the 90 articles chosen for the experiment were updated or promoted. This allowed us to establish a baseline of their search rankings.

Following this step, we promoted two posts per day from Group A and Group B over a two-week period and measured the results during the following week. Start to finish, the entire experiment took about a month to run.

To ensure we covered all our bases, we recorded the following data points:

Going in, we understood the accepted position on the topic is: there is an indirect relationship between social media and SEO. That is, content that performs well on social will likely earn more backlinks, which helps boost search rank.

Because of this indirect relationship between social and search ranking, we needed to be able to articulate whether traditional domain/page authority metrics played a role in any change of rank.

Page authority metrics were based on aHrefs’ Live Index. aHrefs is an SEO platform that crawls webpages and collects data on the relationship between websites. To date, they’ve crawled 12 trillion links. The rate at which aHrefs crawls the web is second only to Google. 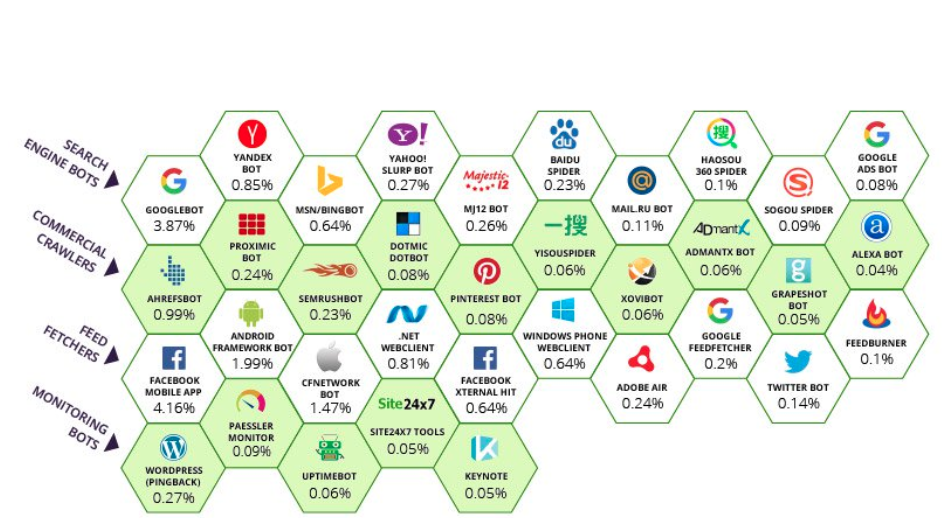 The results of the experiment

From a high level, we can observe an improvement in search visibility between the three keyword baskets. As you can see from the results above, there appears to be a strong correlation between social activity and rankings.

Let’s sink our teeth into the actual data points to better understand the mechanisms behind the boost in ranking. 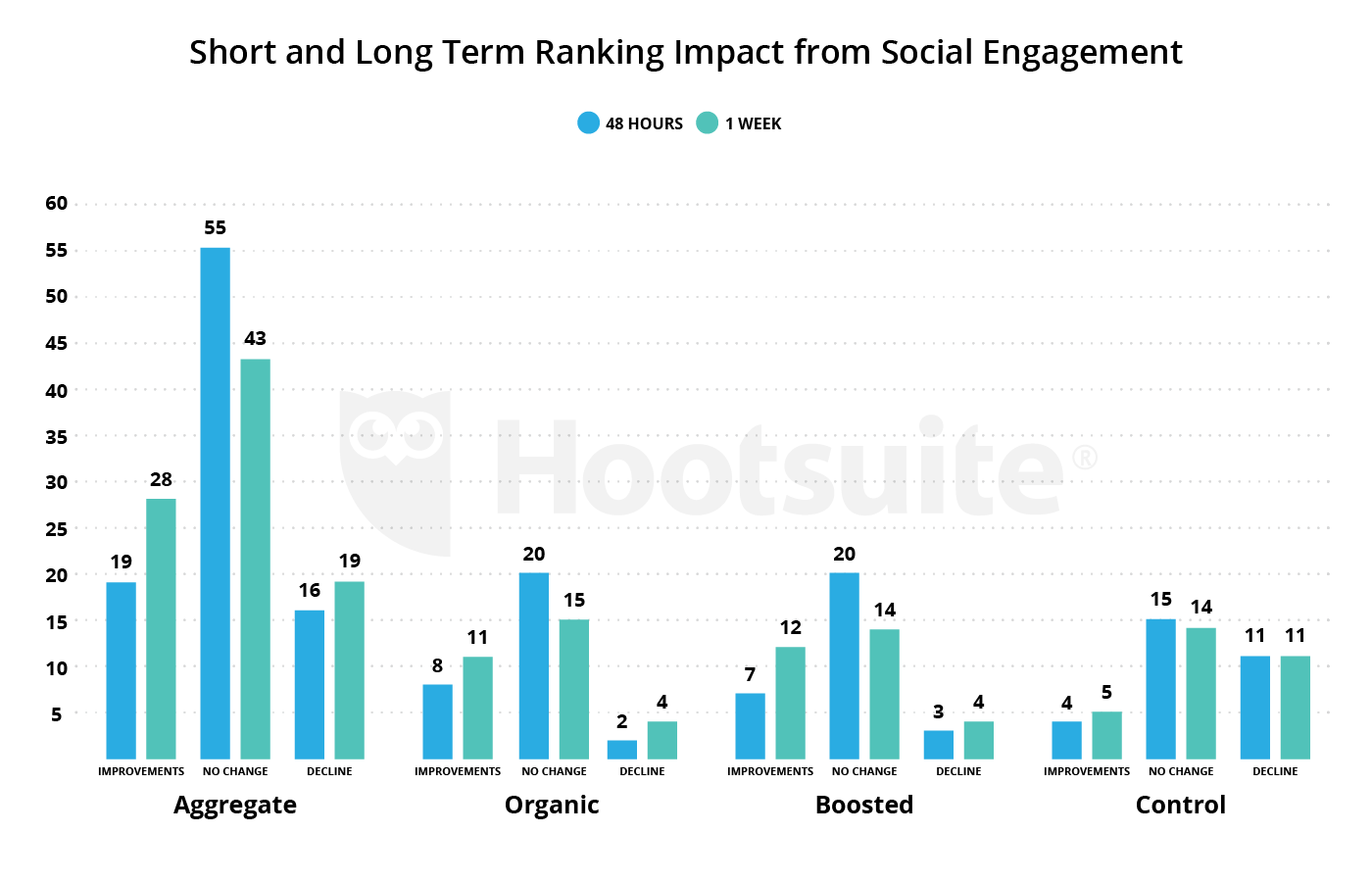 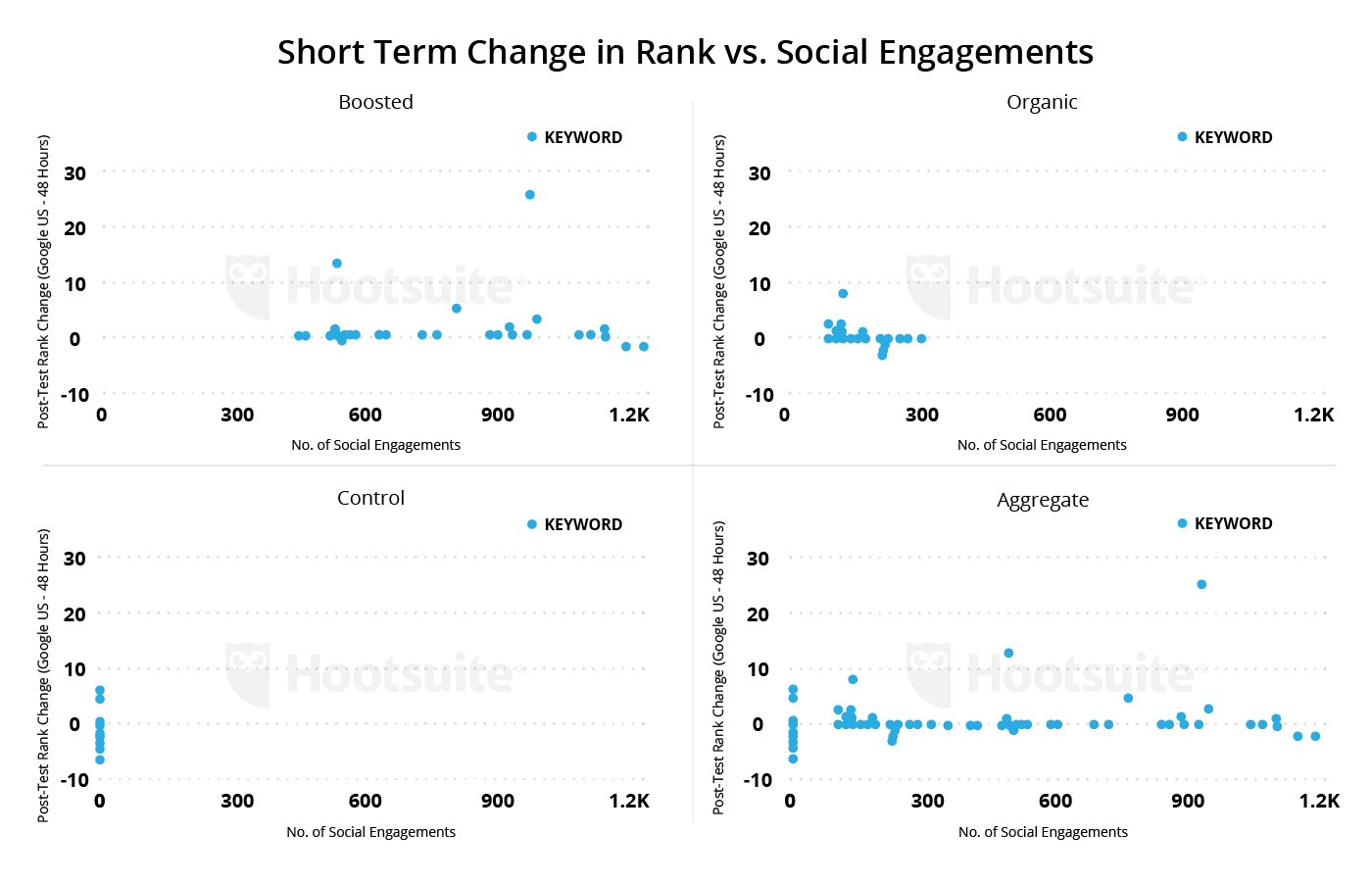 Although rankings were recorded for the duration of the test, we specifically wanted to zero in on changes that happened immediately following a piece of content being promoted on social media.

The scatterplots above illustrate the change in rank observed within the first 48 hours of a piece of content being shared, along with the total number of social engagements. As you can see, the organic and boosted test-groups perform much better than the control group, where there are more observed ranking losses. 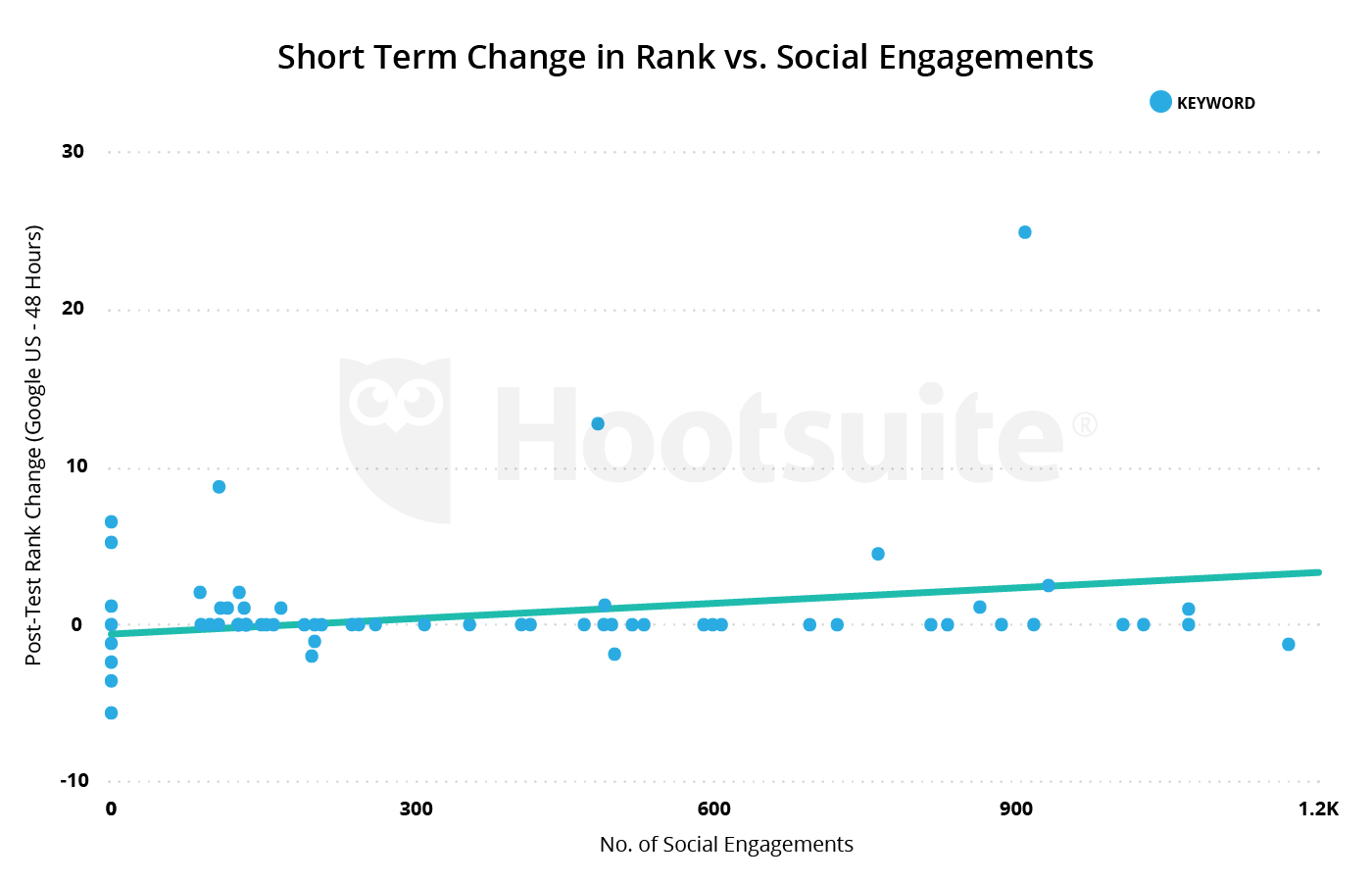 The above chart looks specifically at the change in rank within the first 48 hours vs. the total number of social engagements associated with that content asset across all test-groups. Looking at the data from the surface, we can observe a positive linear trendline, indicating a positive relationship between the number of social engagements and change in rank.

Of course, any seasoned SEO strategist would question this correlation due to a number of factors relating to how social engagements can influence other metrics that are in fact ranking factors. More on that later. 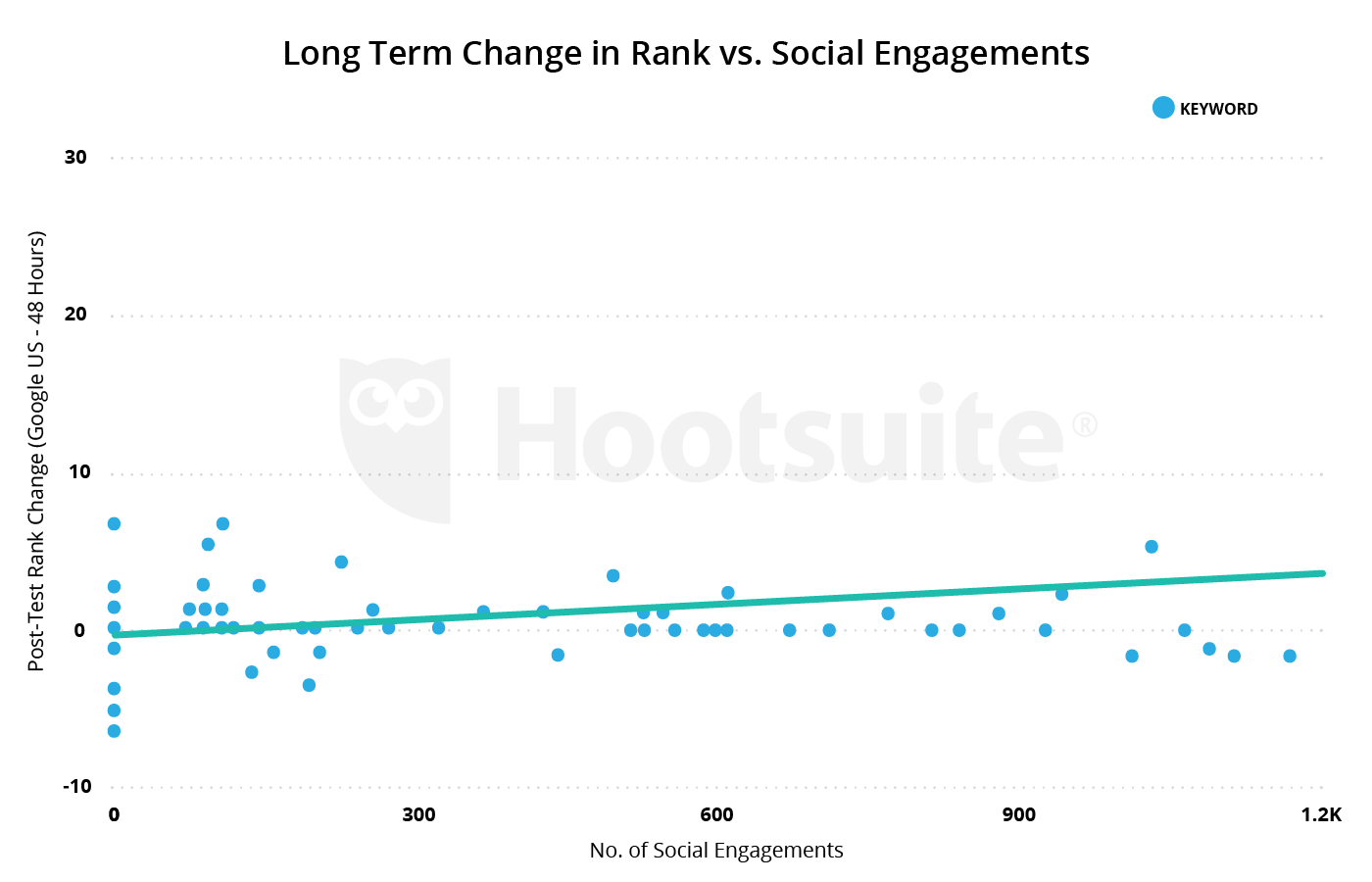 When looking at the the total number of social engagements vs. change in rank after one week across all test-groups, we can also observe a positive linear trendline, indicating a positive relationship between the two metrics.

But what about the age-old argument of: social activity leads to more links, which leads to better rankings? 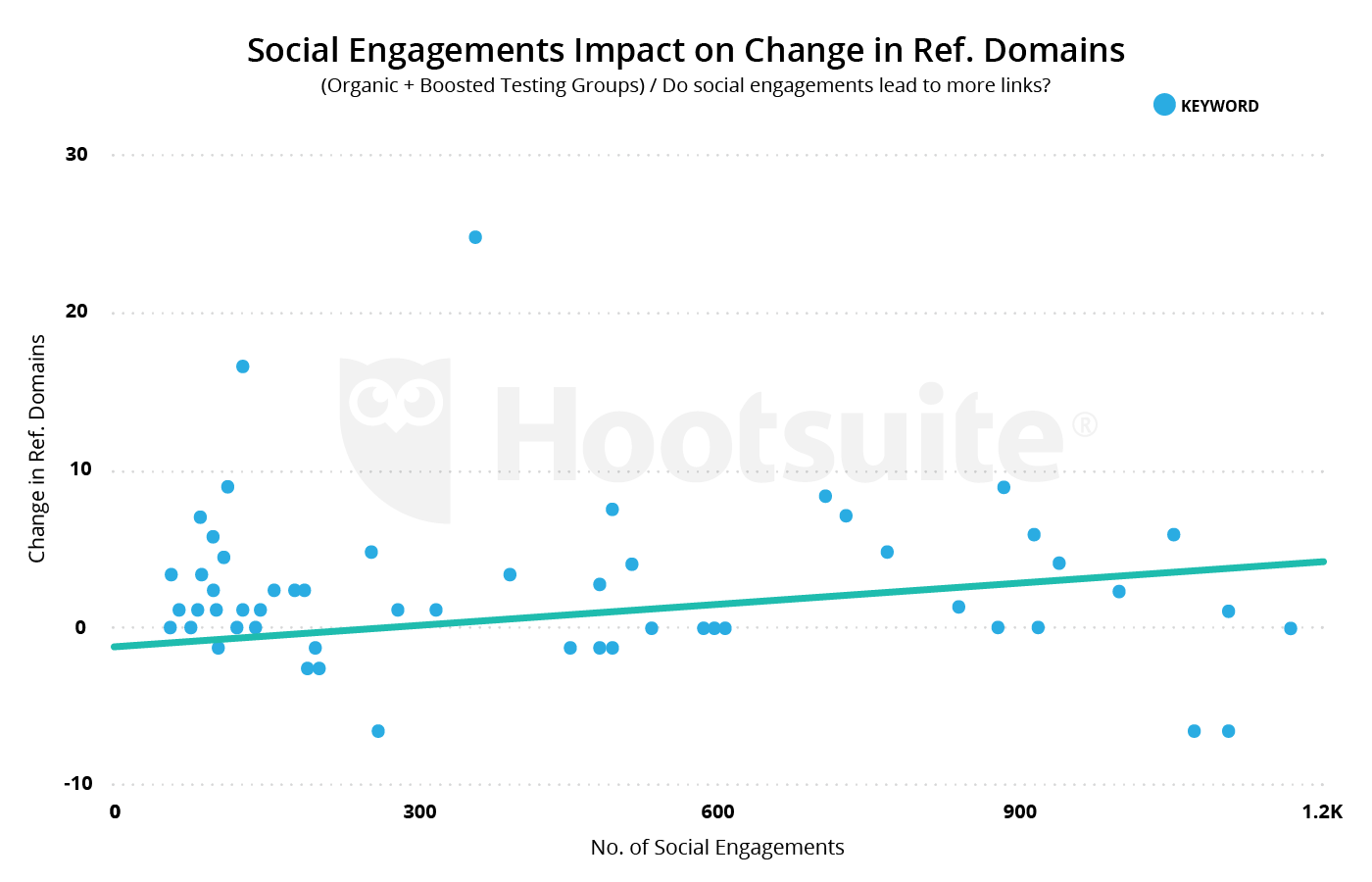 As mentioned above, Google has traditionally refuted the fact that social activity influences rank, instead suggesting that social engagement may impact other metrics, like links, which could impact your rank. This chart illustrates the change in referring domains pointing to a piece of content being promoted vs. the number of social engagements it received. As we can see, there is most definitely a positive correlation between the two metrics. 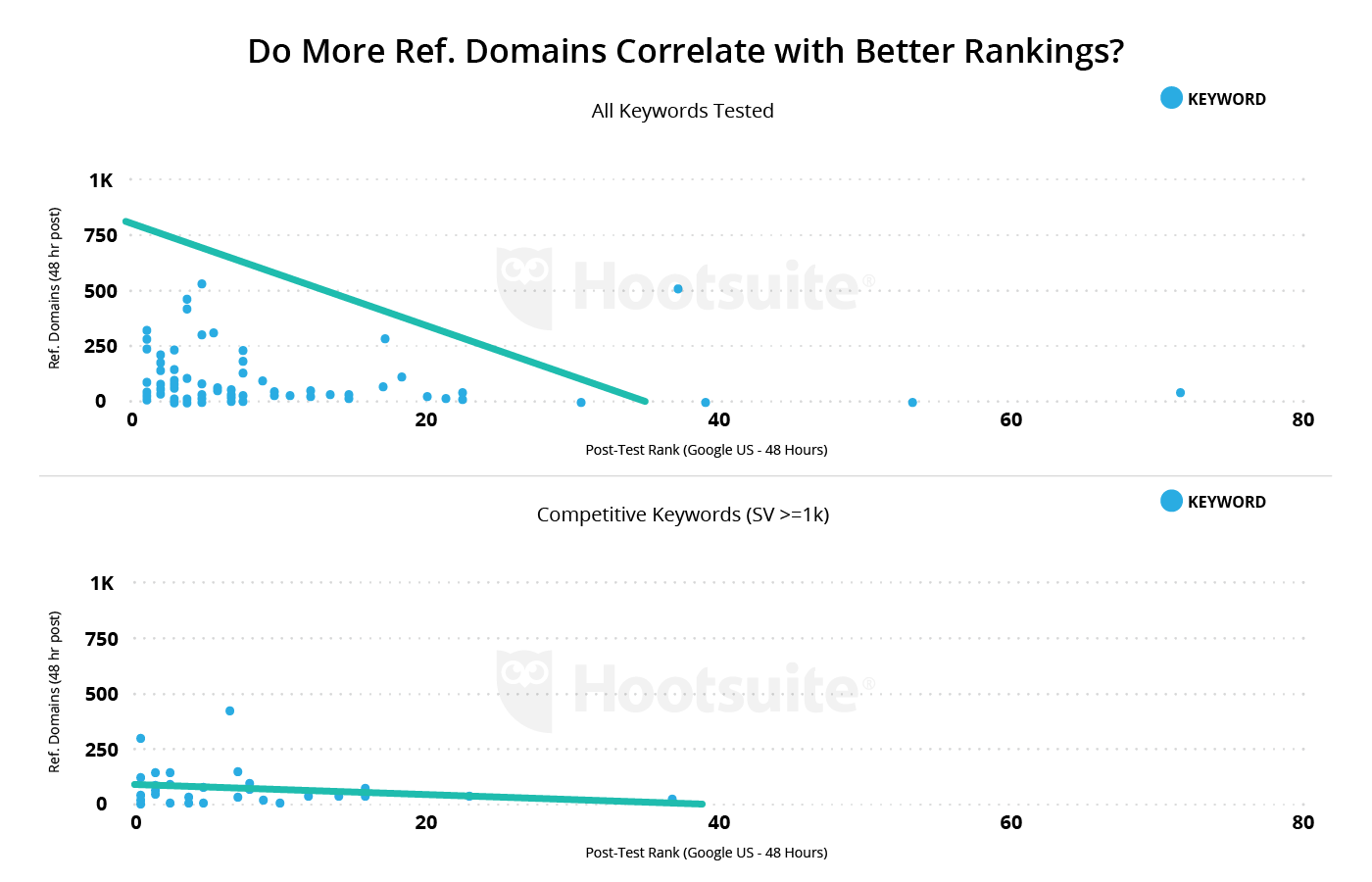 SEO experts can keep scrolling, as they already know the answer to the question of whether or not links correlate with better rankings. Social marketers, however, should listen up. The above charts illustrate rank vs. the number of referring domains pointing to the content asset in context.

As you can see, there is a strong correlation between the number of websites pointing to a piece of content and relative rank. For fun, we filtered results by search volume and observed a much less significant correlation for keywords with more than 1,000 monthly searches, indicating a higher level of competitiveness. This makes sense. You’ll see much bigger improvements on less competitive terms for every link gained, versus more competitive terms.

What happens if we take away instances where we observed a change in referring domains? 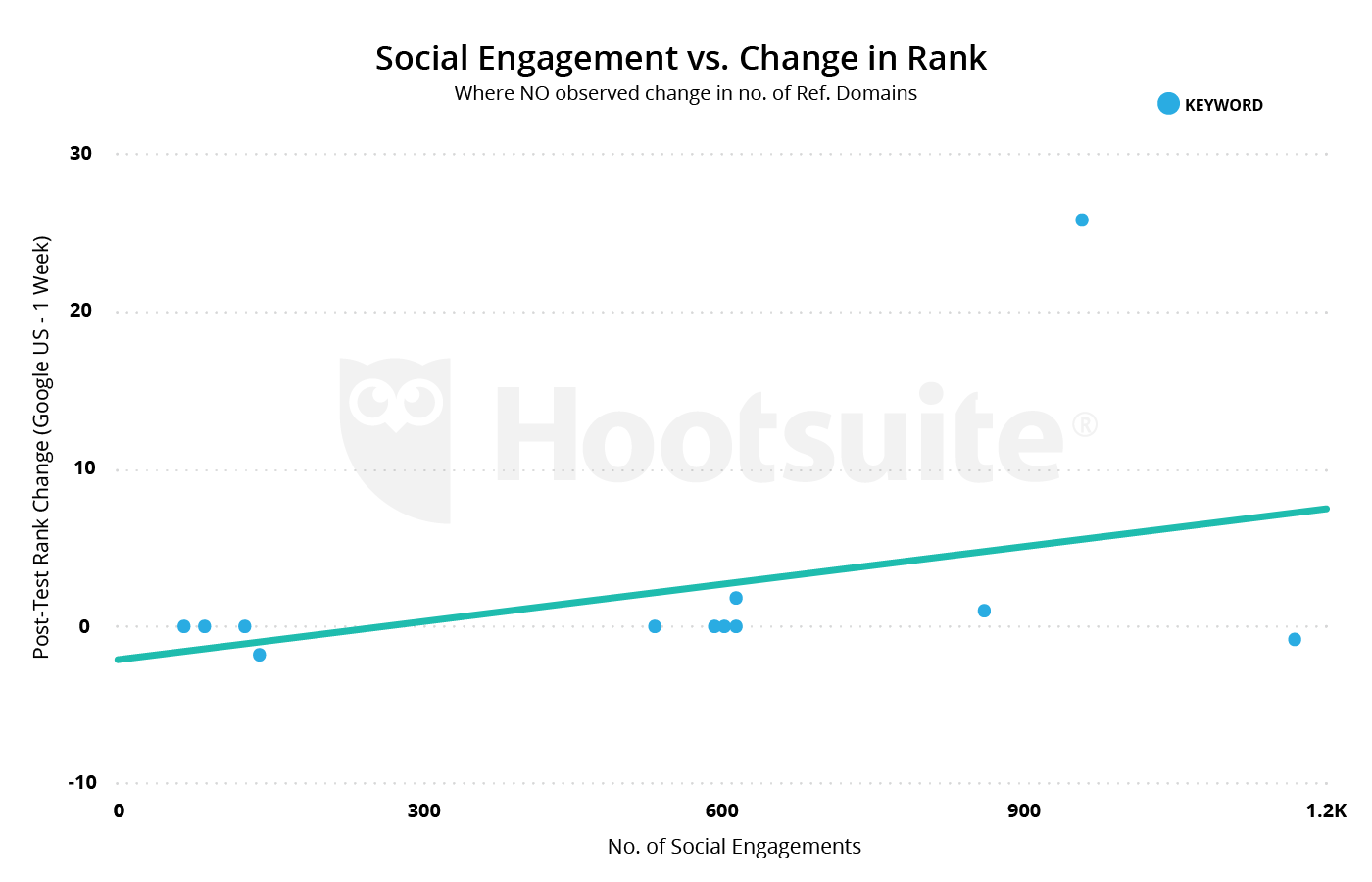 To properly challenge the theory that social marketing can only influence rankings through acquired links, and not rankings directly, we removed all instances of keywords that observed a change in referring domains over the test duration. What we were left with, were only two factors: rank change and social engagements.

Admittedly, this level of filtering gutted our sample size, but left us with a promising picture.

Of course this data encourages a larger-scale test, which would be difficult to pull off considering the stringent SEO and social methodologies applied to this experiment.

What marketers should (and shouldn’t) do with this data

Yes, social can help with SEO. But that shouldn’t give you a free pass to over-post and spam people’s feeds. If you do that, you risk annoying followers. And then they might ignore your posts, or worse, stop following you entirely.

Quality of posts—not quantity—is key. Yes, regular posting is important, but if you’re not offering your audience value there’s no point.

Remember, it might only take one new backlink to significantly improve the search rank of a URL (depending on how competitive the keyword is and how authoritative the site is that links to your own). If you impress the right person enough to share your content on their website, you’ll see a boost in search rank and search visibility.

Social marketers should also take note of the implications of paid promotion on SEO. Indeed, our findings show that paid promotion has nearly double the SEO benefit of organic promotion.

SEO should be thoughtfully integrated into your broader social marketing strategy, but it should not be the driving force. If you focus on creating and sharing quality content, you’ll be in good shape. Quality is, after all, the number one ranking factor in Google.

Use Hootsuite to share quality content on all your social media channels from one dashboard. Grow your brand, engage customers, keep up with competitors, and measure results. Try it free today.