Type “How to get more Instagram followers” into Google search and you’ll find a lot of media and blogs, including our own, offering tips and tricks for how to grow your community. You’ll also probably find a lot of content about paying for new followers.

Most people see these as the only two options for succeeding at Instagram: figure it out, or shell out. The first one is for the ‘good people,’ and the second is for spammers, or at least that’s how it’s generally perceived. In truth, there’s a third option: Instagram automation.

All of this engagement is intended to boost your following with real people, as opposed to the spam accounts you’re likely to get when you buy Instagram followers. It’s an appealing pitch: save time and avoid buying fake followers. But you know what they say about things that seem too good to be true.

That there’s a downside to this approach almost goes without saying. That’s why I tested two of these automation services, for three days each (we’ve also tried buying followers, which you can read about here). Using my personal Instagram account, I discovered the pitfalls of relying on bots, so you don’t have to. While they more-or-less live up to their promises, I wouldn’t recommend them for anyone, especially not brands. Here’s why.


Bonus: Download a free checklist that reveals the exact steps a lifestyle photographer used to grow from 0 to 600,000 followers on Instagram with no budget and no expensive gear.

A tale of awkward comments

My journey starts with about 338 followers. I followed about the same number of people at the time also. I didn’t set a goal for followers because I really had no basis on which to set one. I had no idea if this would work at all.

One of my colleagues put me onto the scent of Instagress, one of the most popular Instagram automation services. Instagress allows you to enter specific hashtags you want to be associated with and then automatically like photos or follow people based on those hashtags. The service allows allows you to enter preset comments which the bot will then post on photos on your behalf.

I decided from the get-go that I wouldn’t use the “liking” features, since this was a fairly simple process and I felt it wouldn’t impact my following very much. I wanted immediate results, like most people who use these automation services.

Instead, I focused on the commenting functionality. I chose the hashtags that my bot would search through, a mix of geographic ties, my interests and generic ones (#Canada, #Montreal, #Vancouver, #PNW, #Fishing, #Water, #Awesome). Then I chose the comments that my bot would post. I tried to choose generic comments that would apply to any situation:

With all my targets set, I pushed start.

Within 12 hours, I only had 6 new followers, around 40 new likes on my photos and about 25 new comments. Not bad for literally zero work on my part, but fairly underwhelming.

Bonus: Download a free checklist that reveals the exact steps a lifestyle photographer used to grow from 0 to 600,000 followers on Instagram with no budget and no expensive gear.

Get the free checklist right now!

Far more concerning to me was that my comments had caused a string of awkward situations with random people who were now wondering what my problem was.

In one case I had commented “damn!” on a random bride’s wedding photo (she graciously said ‘thank you’ instead of calling me a creep). I had also written “I’m jealous!” on a photo of a man beside a very ugly painting that he was clearly ridiculing (What was I jealous of? Did I want the ugly painting? Did I want to be ridiculed?). And, the worst of the bunch, I commented “your pics > my pics” on a selfie of a boy who was clearly in middle school. In fact, his account was composed of only four pictures, three of them selfies. I felt uncomfortable. The teenage boy told me I was being modest.

Between these situations, a few question marks from people wondering why this random guy was commenting on their pictures, and comments on photos I generally would have avoided (religious quotes, Chris Brown songs), I quickly learned the risks of automated commenting. It was immediately clear to me that a business could not risk putting itself in these questionable situations.

Still, I was committed to my experiment. I changed a few of my comments, ditching “I’m jealous” altogether and replacing “Damn!” with “woah” and the complimentary one with “sweet.” Sophisticated stuff.

Then I turned on the automated follower. Six new followers in 12 hours just wasn’t cutting it.

So you want some new followers?

The follow functionality worked much better. Over the next 24 hours I gained just over 70 followers. In the last day and a half that I ran Instagress I gained another 170 followers or so, bringing my total following to 584.

Admittedly I was impressed. I went from 338 to 584 followers, almost a 250-follower increase in three days without really lifting a finger. After my trial ended I also waited a couple of days before continuing my experiment in order to see if my new followers would quickly drop off.

I posted a photo that garnered about 70 likes within 12 hours, far more than it would have without my 250 new ‘friends’.

A #latergram from yesterdays hike in Lighthouse Park ????

Still, the downsides were a little tough to deal with. In addition to the awkward, cringe-worthy comments, my actual Instagram feed was ruined.

To earn those 250 followers the bot followed over 1,400 people in less than three days. Following 1,740 people on Instagram makes your feed useless garbage. Mine was filled with accounts that shared terrible photos while my friends and the users I was actually interested in got buried. Unfortunately many of the accounts I auto-followed were also pure spam accounts that used generic hashtags in order to promote their spam services.

You might read this and think “who cares about the feed, I’m here to promote my own photos.” This is a fair argument.

If your goal is to have a large following with low engagement. Engagement is a big part of building an Instagram community that actually supports your content, and the feed usually helps facilitate this engagement. I couldn’t have found a really engaged follower in my feed even if I wanted to. How can I show my appreciation to my followers when they’re no where to be found? Individually clicking through my follower list and liking photos is a time-consuming and unrealistic alternative.

So yes, I gained a lot of followers. But I lost what I, as an individual, love about Instagram. And I lost one of the main tools a brand might use to engage followers.

I wanted to try another Instagram automation service to see if the results were comparable. I settled on Instamacro, which was a bit more expensive at around $10.00 for three days.

This bot didn’t have commenting functionality, which was fine because we all saw how well that went. Instead, I focused it entirely on automatically following people. I chose the same hashtags as my previous experiment and decided to take this experiment up a notch. See, Instamacro lets you choose how many people you want to follow per minute. Your choices are slow (1-2 people/minute), normal (2-3 people/minute) or fast (3-5 people per minute). If you do the math, even at 3 people per minute that’s over 4,300 follows per day. That’s absurd, which is exactly why I chose fast.

The hashtags I chose narrowed the field so the bot couldn’t follow quite that many users. Instead, in the first 48 hours it followed about 2,600 people which is good since Instagram actually limits the amount of accounts you’re allowed to follow to 7,500 (Instamacro offers to unfollow accounts when you hit that limit so you can keep up a continuous follow/unfollow loop of nonsense).

If I thought my feed was garbage before, I had another thing coming. The amount of spam this excessive following brought into my feed was ridiculous. There were strings of 5, 10, even 15 of the same spam posts in a row. In between all that spam were countless NSFW photos and people selling clothing (body shaping garments are so in right now). 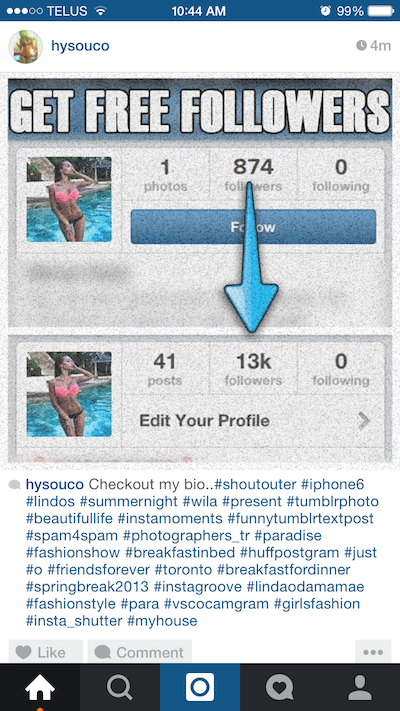 In the middle of my second day I counted the amount of photos posted in a 10 minute span. It was 78. How could you possibly enjoy that much traffic in your Instagram feed. It was terrible.

But I pressed on. By the end of my three days on Instamacro I had around 1050 followers and followed about 5,300 users. Oh, and I went from checking Instagram about 5 times a day to once, just to track these numbers. It wasn’t fun.


Bonus: Download a free checklist that reveals the exact steps a lifestyle photographer used to grow from 0 to 600,000 followers on Instagram with no budget and no expensive gear.

There are a few clear lessons that stand out from this experiment.

Luckily it is possible to get a large Instagram following honestly.

Save time managing your Instagram presence using Hootsuite. From a single dashboard you can schedule and publish photos directly to Instagram, engage the audience, measure performance, and run all your other social media profiles. Try it free today.

Evan is a Blog Specialist for Hootsuite. He writes features, news items, releases and all things Hootsuite.

Get the free checklist right now!