Learn how to use LinkedIn native video, Linkedin video ads, technical specifications, and more. Plus, get inspiration with a bunch of top examples.

Since the launch of LinkedIn native video in 2017, LinkedIn has proven that it’s more than just a platform for long-form B2B content.

In one year, LinkedIn video posts generated more than 300 million impressions on the platform. They also earn an average of three times the engagement of text posts. Plus, early findings from LinkedIn’s beta program show that LinkedIn native videos are five times more likely than other content to start a conversation among LinkedIn members.

Impressive engagement stats aside, video marketing has been shown to boost revenue across social platforms. According to Aberdeen Group, brands that use video marketing grow their revenue 49 percent faster than companies that don’t.

Ready to get on board yet? This guide will cover everything you need to know about LinkedIn video, from the basics on how to use LinkedIn native video, to technical specifications.

And if you’re looking for that spark of inspiration, scroll down for a round up of examples and ideas.

It’s still common practice for many brands to upload to a video-hosting platform such as YouTube or Vimeo, and then share the link on LinkedIn. This works, but for many reasons, LinkedIn native videos tend to be a more effective strategy.

“Native video” is video that is uploaded directly to LinkedIn or created on the platform itself.

LinkedIn video ads are sponsored company videos that appear in the LinkedIn feed. Video ad campaigns have greater potential to increase brand awareness, brand consideration, and lead generation since they are typically served to a larger, more targeted audience.

Unlike LinkedIn native video, which can be a maximum of 10 minutes long, LinkedIn video ads can run for up to 30 minutes.

Company page administrators can set up a video ad campaign using Campaign Manager, or elect to sponsor an existing post.

How to use LinkedIn native video

On desktop or mobile, sharing LinkedIn native video is pretty much a three-step process. Mobile allows you to record and post in-app and add text and stickers, whereas desktop requires a pre-recorded video.

On mobile:
1. Look for the share box (iOS) or post button (Android) at the top of the feed.
2. Tap the video icon.
3. Record a video in the app, or upload something you re-recorded.
4. Tap the filters or text button.
5. Add filters and/or text.

After posting a video you’ll have access to audience insights, including how many views, likes, and comments your post is receiving. You’ll also be able to see the top companies, titles, and locations of viewers. Learn which video metrics matter most.

How to launch a LinkedIn video ad campaign

Here’s a quick guide to setting up a LinkedIn video ad campaign:

1. Log in to Campaign Manager to create your campaign.
2. Select Sponsored Content.
3. Name your campaign.
4. Choose your main objective. Options include: get website visits, collect leads, or get video views.
5. Select video as your ad type format and click Next.
6. Click Create new video.
7. Fill out the form, upload your video, and hit Save.
8. After your video has uploaded, select the video by clicking the checkbox next to it and then hit Next.
9. Choose your target audience criteria and click Next.
10. Set up your bid, budget, the duration for your campaign, and click Launch Campaign. 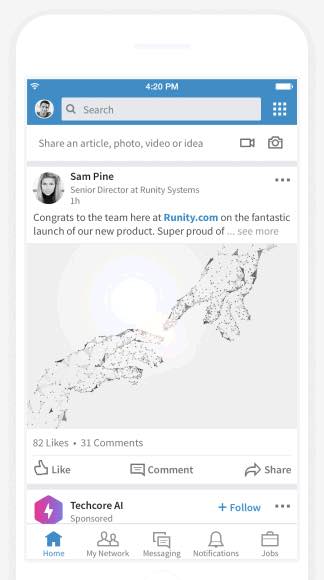 Plan and adhere to these technical specifications when creating video for LinkedIn.

These specifications vary between standard native videos and LinkedIn video ads, so make sure to take note of the difference.

Planning to serve your video on more than on social network? Check out our complete guide to social media video specs.

Before going into selfie mode and hitting the record button, here are a few things you should consider.

2. Aim to capture attention from the start

LinkedIn recommends that videos include a hook within the first 1-2 seconds.

Attention that wanes after the first few seconds will typically drop off after the 10 second mark, LinkedIn research finds. That’s backed up by Facebook findings, which show 65 percent of people who watch the first three seconds of a Facebook video will watch for at least 10 seconds, while only 45 percent will watch for 30 seconds.

Plan to share your message, or show your audience what you want them to see, early on. That way you increase the likelihood of leaving an impression with more viewers.

4. Design for sound off

Up to 85 percent of social media videos are played with no sound. That means most LinkedIn members will be watching your video as if it’s a silent film. Prepare accordingly by including descriptive images, explanatory infographics, and even expressive body language.

A single shot video can get boring, and with viewers dropping off by the second, varying the shot is one way to keep them engaged. Even if you’re shooting an interview, borrow a second camera to record from different angles. Or, film some b-roll to use under voiceover.

According to LinkedIn, the most successful video ads are less than 15 seconds long. But lengths can vary when it comes to LinkedIn native video. Here are a few things to consider:

8. Close with a strong call to action

What do you want viewers to do after they’ve watched the video? Leave them with a clear direction. Here are some tips for writing CTAs.

The same likely goes for LinkedIn, so don’t miss this opportunity to describe your video or drive home a message. But keep it short and direct. We recommend 150 characters or fewer.

Adding LinkedIn hashtags and @ mentioning relevant companies or members in your caption is a useful way to increase reach and expose your video to more viewers.

And don’t forget to include a link, especially if the point of the video is to drive visits to your website or product page. As a bonus, LinkedIn finds that posts with links tend to have 45 percent higher engagement than those without one.

10. Use the word “video” for promotions

LinkedIn’s Video Ad Guide notes that promotional posts or emails that include the word video “can vastly increase the click-through rate.” If you’ve put in the effort to create a video, make sure to promote it—and use the keyword.

If you have a company blog, you can also analyze your best performing content and consider how it could be transformed into a LinkedIn video.

Changes to the board, new initiatives, acquisitions, partnerships, and more are all fodder for video content.

2. Announce the launch of a new product or service

Use LinkedIn video to get customers excited with an announcement of things to come.

Show viewers where the magic happens. This is a great opportunity to impress customers with the skill, craftsmanship, or technology behind your operation. Or, show off your super cool office culture.

Example: Lego Behind the Scenes

Instructional or educational videos are particularly useful if you’re in an industry that uses complicated jargon or involves complex understanding. See this as an opportunity to teach your audience something new.

Looking to register more attendees for an upcoming conference? Create a video guide or highlight some of the reasons they may want to enrol.

Speaker highlights, product demos, and interviews can form a winning package of an event’s top moments.

Position your company as a thought leader with interviews that share the vision of executive team members.

8. Tell a story with a case study

Testimonials are a great way to share how your products or services have helped customers.

9. Let your customers know what you stand for

Use LinkedIn video to let your clients, employees, and prospective employees know what your company stands for.

Introduce customers to the people who make things happen.

Videos about corporate social responsibility initiatives can bring attention to the social good your company is doing, and more importantly, to a good cause.

If your company gets mentioned on Jeopardy, you kind of have to share the video.

Manage your brand’s LinkedIn presence the smart way—use Hootsuite to schedule videos and updates, target posts, engage with followers, and measure the impact of your efforts. Try it free today.