What are Twitter Lists? They enable you to engage with followers more effectively and keep secret tabs on the competition.

With 330 million monthly users, Twitter offers a vast network of potential people and brands to connect with. But with 500 million tweets sent per day, the sheer volume can make it seem impossible to keep up with your Twitter feed.

Fortunately, there’s a simple way to organize your Twitter feed into targeted topics, so you can always keep up with the most important conversations in your industry: Twitter lists.

No matter how many people you’re following on Twitter, lists offer sanity-saving organization and targeting. They also allow you to engage more effectively and keep secret tabs on the competition.

Here’s a quick primer on how to set up Twitter lists. 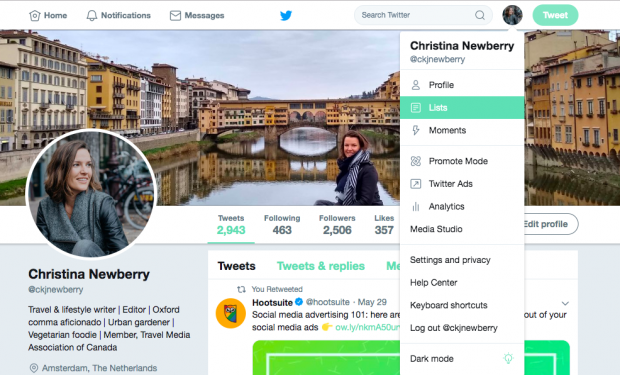 3. Scroll down until you see Create a list in the left sidebar. Click Create new list.
4. Enter a name and optional description for your list. Your list’s name needs to be 25 characters or less and can’t begin with a numeric character. The description can be a maximum of 100 characters.
5. Choose whether to make your list public or private. If it’s public, anyone on Twitter will be able to see and subscribe to your list. If it’s private, only you can see it.
6. Click Save list. 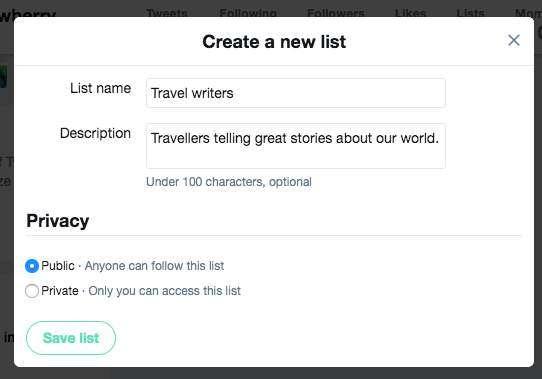 7. You’ll land on a page that invites you to add people to your new list. There are three ways to add people: 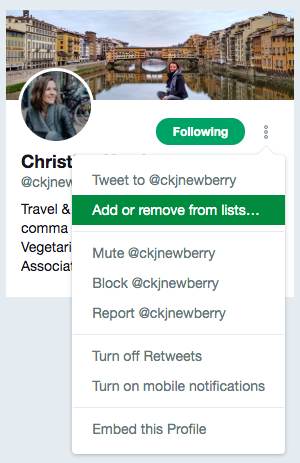 You can add or delete people from your Twitter lists at any time using the options in step seven.

To view your lists, click on your profile icon and choose Lists again. If your new list doesn’t appear right away, try refreshing the page and clearing your cache.

These screenshots show how to set up Twitter lists using a computer. The icons and labels differ a bit on mobile devices, but the process is essentially the same.

1. Select the Streams icon from the launch menu.
2. Click the tab to which you want to add your new Twitter list. (Hint: Create a new tab called Lists to view your lists all in one place.)
3. Click Add Stream.
4. Select your Twitter profile and click the Lists tab on the right.
5. Click Create a new list.
6. Enter a name and optional description for your list. Your list’s name needs to be 25 characters or less and can’t begin with a numeric character. The description can be a maximum of 100 characters.
7. Choose whether to make your list public or private. If it’s public, anyone on Twitter will be able to see and subscribe to your list. If it’s private, only you can see it. 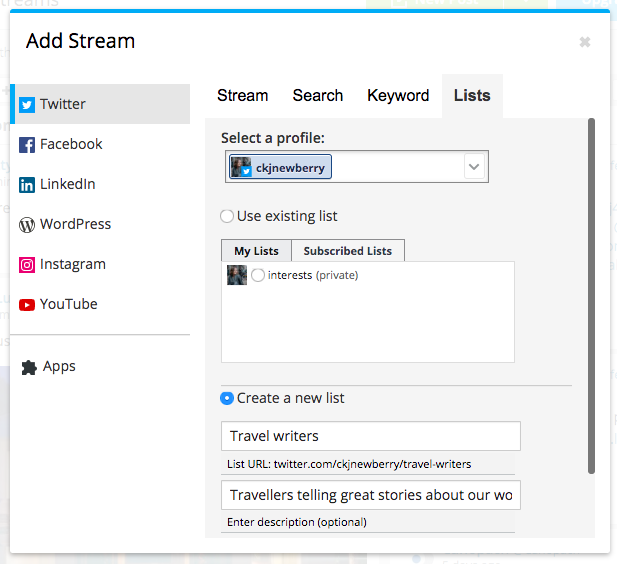 Just in case you get really, really into lists, here are some limits to keep in mind.

9 ways to use Twitter lists to grow your brand

1. Keep an eye on the competition

Twitter is a great tool for keeping an eye on the competition. But you don’t want to reward competitors with a follow, or let them know that you’re monitoring their tweets.

You don’t need to follow people to add them to a list. That makes private lists a great way to keep track of groups of users you don’t necessarily want to follow. Just make sure to double-check that your competitors list is set to private before you start adding accounts to the list. If it’s public, each competitor will get a notification when you add them.

In addition to monitoring tweets, lists offer another way to keep tabs on the competition.

When you create a public list of employees or brand advocates, you make it easy for any Twitter user to see what your best brand cheerleaders are saying on the network. It’s also an easy way to give a little recognition to your biggest fans.

If you run a Twitter chat, you could create a list for regular participants, or for your guest co-hosts. For example, Madalyn Sklar maintains a list of guests from the #TwitterSmarter weekly chat.

Once your brand reaches a certain size, you might have a number of different Twitter accounts for different products or product lines. A Twitter list is a great way to bring all of these offerings together in one place.

Since a Twitter list is essentially a curated mini-Twitter feed, creating Twitter lists based on topics relevant to your industry is a great way to make sure you’re always up-to-date on the most important conversations in your niche. Smartly crafted feeds can be a great tool for social listening.

Of course, you’re not the only one creating Twitter lists. There are likely all kinds of Twitter lists out there already that are packed full of great content relevant to your niche. Why not take advantage of the work your industry peers have done by subscribing to their lists?

To find relevant lists to subscribe to, head to the Twitter profiles of relevant people or accounts in your niche. Click on the Lists tab, and look at what lists they’ve created, subscribed to, and been added to. For example, Google Analytics maintains a list of women working in the analytics field.

5. Engage influential people and accounts in your industry

Whenever you add someone new to a public list, they will get a notification letting them know you have done so. This is an easy way to get attention from accounts that may not have noticed you on Twitter yet.

But even more important, a Twitter list of influencers or other important people in your industry gives you a great collection of accounts to monitor for engagement opportunities. Open this list when you have time set aside for active Twitter participation, so you can leap in with some responses, retweets, and likes.

6. Connect before or after an event

Connecting in person at an event is great, but it can be hard to keep track of all the business cards you pick up and remember who was who.

A Twitter list can be a good way to meet some of your fellow attendees even before the event takes place, so you can prioritize who you want to meet during your limited in-person time.

After the event, a Twitter list of attendees serves as an easy way of continuing to network online.

Check the Twitter profile of the event’s host or sponsor to see if they have already created a Twitter list of attendees. It’s becoming more common, but if the event is not in the tech or social sphere, the hosts may not have thought of a Twitter list as an added benefit for attendees. You could reach out to suggest they create one.

If the hosts don’t create a Twitter list of attendees, you could create your own. It likely won’t be complete, but you could make a good start with any people you connect with directly at the event, plus the speakers list. You could also add people who tweet with the event’s hashtag.

7. Monitor which lists you appear on

You’ll get a notification every time you’re added to a public list. When someone adds you to a list, it’s a good sign that they’re interested in what you’re up to. Take a look at their profile to see if it might be appropriate to follow them or add them to one of your own lists in return.

You might also want to consider creating a private Twitter list of people who have added you to lists. Think of it as a way of collecting leads.

From time to time, it’s a good idea to check which lists you appear on and make sure there are none that cause you concern. For example, I’m currently on 93 lists, mostly relating to writing, travel, and food. (That’s great, since these are three of my favorite things.)

To find what lists you’re a member of, head to your Twitter profile and click Lists, then click Member of. Take a look just to make sure there’s nothing that causes concern, since this information is public.

The Twitter algorithm can put a confusing jumble of tweets into your Top Tweets feed. A Twitter list allows you to create your own priority collection of the accounts whose tweets you want to see first.

You can create a separate list for each of these sets of accounts. You might want to keep your commute and humor lists private, but create a public list of the people you follow in your niche. Or, you could go fully stealth and keep your niche list private, too. Just remember that a public list is fully public, and anyone can see it and subscribe.

Use Hootsuite to manage your Twitter presence alongside all your other social media profiles. From a single dashboard you can schedule and publish posts, monitor relevant conversations, engage the audience, run ads, measure performance, and much more. Try it free today!