Knowing how the Twitter algorithm works is crucial information for any social media marketer.

More than 500 million tweets are sent everyday. That’s 5,787 tweets a second. How can your brand stand out from the crowd?

Much like Facebook and Instagram’s algorithm, Twitter’s algorithm works behind the scenes to rank and prioritize posts it thinks people want to see.

Yes, Twitter brought its chronological timeline back with the Latest Tweets feed. But the algorithm is still in play in the Top Tweets feed.

Read on to learn about the recent Twitter algorithm changes, and how your brand can optimize tweets for maximum organic reach.

When Twitter launched in March 2006, its timeline structure was simple: Tweets were displayed in reverse chronological order. In other words, each user’s feed contained tweets from their followers, from the most recent tweets onward.

The timeline undergoes its first significant tweak. Instead of only showing content from followers, feeds start to include recommended tweets, topics, and accounts.

In early 2015, Twitter introduced a “While you were away” feature. As a forerunner to “In case you missed it,” this module was meant to provide users with a recap of notable tweets they might have missed.

Designed as an answer to FOMO (fear of missing out), this recap was curated based on “engagement and other factors.”

Using the same algorithm applied to “While you were away” content, Twitter began to push the “best tweets” to the top of feeds.

The company’s first foray into algorithmically restructuring timelines was met with #RIPTwitter backlash. In retrospect, the outrage was probably a bit of an overreaction, especially since users just had to refresh their feeds to switch back to chronological.

Hello Twitter! Regarding #RIPTwitter: I want you all to know we're always listening. We never planned to reorder timelines next week.

In an effort to be more transparent, Twitter explained tweets were being scored on a relevance model, designed to predict which content users would find interesting. Twitter also replaced While you were away with In case you missed it.

In September 2018, Twitter announced that users would be able to toggle between Top Tweets and Latest Tweets. What that means is people can now easily switch between an algorithm feed and a real-time feed.

New on iOS! Starting today, you can tap ✨ to switch between the latest and top Tweets in your timeline. Coming soon to Android. pic.twitter.com/6B9OQG391S

The primary sections on Twitter’s timeline now include: 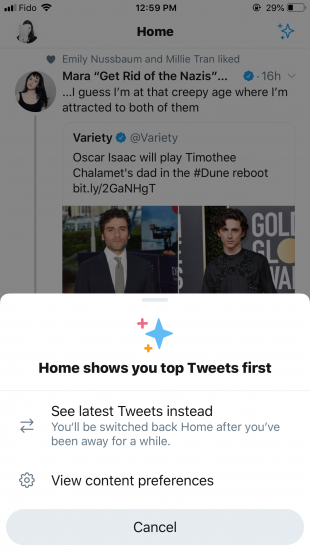 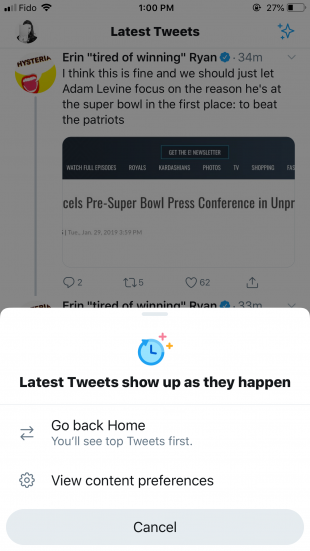 At the beginning of 2019, Twitter made several announcements hinting that there will be more changes in store for its algorithm in the future.

At CES, the company shared that it would begin publicly testing conversation features with users. And in January, Twitter announced it would be partnering with researchers at UC Berkeley to study how it could improve the performance of machine learning on its platform.

Despite modifications over the years, Twitter’s CEO, Jack Dorsey, has been insistent on maintaining a real-time platform.

The primary domain of Twitter’s algorithm is the Top Tweets feed.

According to Twitter, Top Tweets are chosen “based on accounts you interact with most, tweets you engage with, and much more.”

We can only conjecture what “much more” means. Every algorithm has its secret sauce. But here’s what Twitter has shared about its ranking signals:

10 tips to increase the organic reach of your tweets

For any brand, the more positive engagements you have with your followers, the better. But consistent engagements can earn credit with Twitter’s algorithm, too.

As the company explains on its blog, “The more often you tweet, the more likely your audience will see and engage with your content.”

Don’t count on the In case you missed it feature to rescue your unseen content. It’s critical to tweet during peak engagement hours, especially since the half-life of a tweet is 24 minutes.

Hootsuite research shows that the best time to post on Twitter is 3 p.m. on weekdays. But you should also check Twitter Analytics to find out when most of your followers are online.

Don’t forget to plan around events, too. Under Armour’s #BreakTheGame campaign starring NBA superstar Stephen Curry is a good example of this. The athletics retailer realized Curry’s fans were active on Twitter every time he scored a three-pointer. So Under Armour created content to drop with every three-point basket.

In the playoffs, we are dropping a 3-second Curry ad every time @StephenCurry30 drops a 3. #BreakTheGamehttps://t.co/V2ar9GMFh1

Hashtags can drive brand awareness and engagement, which can translate to algorithm recognition. Or, land your hashtag in the Trends for you section.

Pandora Music’s #SoundsLike campaign was a clever way to spark conversation and engagement. The company asked Twitter users to tweet an emoji with the hashtag, and @pandoramusic tweeted back what it thought the emoji would sound like.

4. Use photos, videos, and GIFS

Twitter stats consistently show that rich media gets higher pick up. Tweets with video can bring in as much as 10 times more engagement.

Don’t forget GIFs, too. A Twitter study found that tweets with a GIF received 55 percent more engagement than those without.

Polls are fun way to engage with Twitter users, and they have the added benefit of providing feedback.

To gage interest for Mayochup, a blend of ketchup and mayo in a bottle, Heinz created a poll on Twitter. More than 900 thousand votes and 2.4 billion impressions later Mayochup was on its way to grocery stores.

Want #mayochup in stores? 500,000 votes for “yes” and we’ll release it to you saucy Americans.

Even if you tweet at peak times, chances are many followers may have missed your tweet. If content performed well the first time, it likely will again.

But don’t simply Retweet or copy your top performing content. Find creative ways to repackage and re-share what works.

A lot can be accomplished organically. But if your budget allows, a little promotion can go a long way. Check out our guide on how to use Twitter ads.

Having a higher follower account lends credibility and is a factor for the Twitter algorithm. Luckily, we’ve amassed 41 tips to help you get more followers on Twitter.

When it comes to algorithms, there are no one-size-fits-all solutions. Use Twitter Analytics to track what works and what doesn’t, and tailor these tips accordingly.

Save time managing your Twitter presence by using Hootsuite to share video, schedule posts, and monitor your efforts. Try it free today.