Knowing how the Twitter algorithm works—and how it can help you stand out from the crowd—is crucial information for any social media marketer.

Not everyone loves to have an algorithm determine the content they see online. That’s why Twitter gives people a choice: Top Tweets or Latest Tweets. In other words, Twitter algorithm or no algorithm.

But the truth is, the Twitter algorithm is kind of unavoidable. From In Case You Missed It in the Twitter timeline, to For You in the search tab, it’s always working to show users the tweets it thinks they want to see.

As a business, that means you need to optimize your tweets to make sure they are picked up by the algorithm and seen by the right people.

Twitter algorithm changes are not made lightly. Especially since the algorithm’s first appearance on the platform made #RIPTwitter a trending hashtag. But there have been a few recent tweaks, including Twitter Topics and customizable timelines that you should know about.

Twitter’s algorithm, like most social media algorithms, is all about personalization. Into Star Wars? Baby Yoda was likely all over your Twitter timeline. Follow American politics? Chances are you saw Elizabeth Warren and Kate McKinnon flip the switch.

But how exactly does the Twitter algorithm work? All social algorithms use machine learning to sort content based on different ranking signals.

It adds up to a complex series of calculations based on what people have liked in the past, what people like them like, and more.

Latest Tweets shows people their followers’ tweets in real-time. Top Tweets uses the Twitter algorithm to shuffle posts in what it suggests as a better order.

New on iOS! Starting today, you can tap ✨ to switch between the latest and top Tweets in your timeline. Coming soon to Android. pic.twitter.com/6B9OQG391S

Late last year, Topics started showing up in Twitter timelines, too. Twitter suggests these topics based on what it thinks someone likes. When someone follows a Topic, related tweets, users, events, and ads will appear in their home feed. Right now there are more than 1,000 Topics, with new ones added almost every week.

Now you can follow specific topics to discover the Tweets you care about. pic.twitter.com/3tVBRFuTYd

Twitter members can also add up to five lists they can swipe between to switch up their timelines. Lists can be public or private, and like the timeline, users can toggle between Latest Tweets and Top Tweets within them.

Customizable timelines that are easy to access? We’re thinking about ways to do this! One idea we had is for you to be able to swipe to your lists from home. If you're in the test tell us what you think! pic.twitter.com/g5WMaNZ57N

The algorithm doesn’t affect Latest Tweets. But it does influence Top Tweets and Twitter Topics. It also helps determine what appears in In Case You Missed It (ICYMI), Twitter Moments, For You, trending hashtags, and more.

According to Twitter, Top Tweets are chosen “based on accounts you interact with most, tweets you engage with, and much more.” We can only guess what “much more” means. Every algorithm has its secret sauce.

Here’s what Twitter has shared about its Top Tweets and Topics ranking signals: 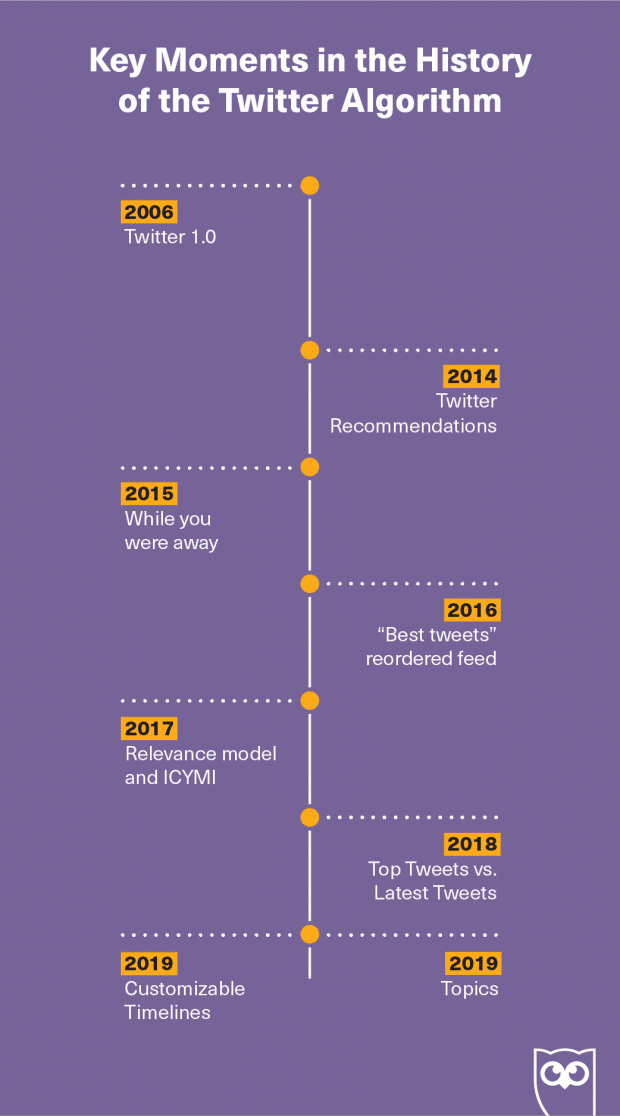 Feeds start to include recommended tweets, topics, and accounts.

A forerunner to “In case you missed it,” this section recapped select tweets, chosen based on “engagement and other factors.”

In an effort to be transparent, Twitter explained tweets were being scored on a relevance model that used recency, engagement, and interactions to personalize feeds. “While you were away” was also swapped for “In case you missed it” (ICYMI).

This feed overhaul allows users to toggle between Top Tweets and Latest Tweets. In other words, an algorithm feed and a reverse chronological order feed.

Timelines can be swapped for up to five different lists.

In November, Twitter introduced Topics as a way for users to follow conversations. Following a Topic adds related Tweets, users, events, and ads to the feed.

10 Tips to increase the organic reach of your Tweets

Try these tips to increase reach and land a little higher on the Twitter timeline.

The less often you tweet, the more likely your account is to be the target of purges and unfollows. Don’t feel overwhelmed, though. We can help you schedule tweets.

Don’t count on ICYMI to rescue your unseen content. It’s critical to tweet during peak engagement hours, especially since the lifespan of a tweet is shorter than a Friends episode.

Hootsuite research shows that the best time to post on Twitter is between 9 a.m. and 4 p.m. EST on Monday or Thursday. But the 11 a.m. to 1 p.m. EST window tends to be best. You should also check Twitter Analytics to confirm when most of your followers are online and active.

Hashtags are a great way to gain traction on Twitter—branded or otherwise.

Keep an eye on trending hashtags. Or even better, plan ahead with top hashtag and keyword forecasts on the Twitter blog. But don’t overdo it. Twitter recommends using no more than two hashtags per tweet.

Then there’s the @ tag. If you mention someone, be sure to include their handle. That way they’ll know to like and retweet as soon as it’s published. Include a photo, and you can tag up to 10 people in it.

This tweet from Time’s Up offers a masterclass (even if they snuck in a third hashtag). Trending hashtag? Check. Mention? Check. Photo? Check. Photo tags? Check.

We've had enough of pay inequity. This #IWD2020 we want you to get loud with us & @USWNTPlayers – because our voices are powerful.

Signal boosting of this kind is bound to score a few points with the Twitter algorithm.

A boost in engagement can boost your tweet’s ranking with the Twitter algorithm. And it’s well known that tweets with photos, videos, and GIFs tend to get more attention.

Your reaction when you hear about @AirCanada’s new service to The O.C. 📺☀️ pic.twitter.com/EYyM0Hmjeh

Our data shows that Tweets with a GIF get 55% more engagement than those without.

When it comes to soliciting engagement on Twitter, it’s simple. Ask and you shall receive.

Ask a question. Ask for feedback. Ask for replies in GIFs or emojis.

Cashapp’s #CashAppWisdom strategy raked in 11K comments in less than an hour.

Cash App is giving out advice, six words at a time. Hit us with your question and $cashtag. #CashAppWisdom

Hosting a chat or “ask me anything” is another good way to get a convo rolling.

Welcome to #HootChat everyone — let’s get rolling! Where is everyone joining in from today? (Follow and use the hashtag to join in) 👋 pic.twitter.com/GNZp8X3xYi

Add an incentive with a Twitter contest. The engage-to-enter format is a tried and true way to boost likes, retweets, or comments.

To celebrate our *Single* Fares from €9.99 this Valentine’s Day, we’re giving away a €/£100 flight voucher right here on Twitter 😍🛫

To be in with a chance of winning, just retweet this post and reply with a GIF that sums up your love life right now 😆 pic.twitter.com/9qQgyssTCj

Obviously, if you ask for engagement, be prepared to return it. Retweet relevant posts. Respond to questions. Show appreciation. There’s no such thing as a one-way conversation.

Thanks for playing around, Jacob! Do let us know if there's anything you need answered. We're here for you.

Another thing you can ask for: Votes. Polls are a quick and easy way to ask for input on something. It could be anything from a thematically on-brand survey, to a request for concrete feedback.

How far ahead to you plan your Tweets?

It's #GroundhogDay! What series would you watch over and over again for the rest of your life?

The added benefit of a call-and-response strategy is that it provides you with tons of customer feedback. Make sure you’re prepared to make the most of it with listening tools like Hootsuite.

Threads are simply fun to unravel. The format offers brands a fun way to build out a theme or narrative. And, of course, several opportunities for followers to engage.

Take this Netflix thread for example. It takes on the Wash Your Lyrics meme with theme songs from some of its popular shows. If you’re a Friends fan, you’ll like the Friends tweet. Breaking Bad? There’s one for you too.

Wash your hands you detty pig a thread:

Then there’s Quip’s take on Rihanna as electric toothbrushes. You simply can’t look away.

Be a part of the conversation on Twitter. Look for trends and topics that your brand can contribute to—or better yet, lead. Plan ahead with Twitter’s 2020 marketing calendar.

Don’t trend-jack or news-jack your way into every conversation on Twitter. Find the topics and themes that make sense for your brand. Doing this will also increase your odds of appearing in a Twitter Moment.

For example, the Super Bowl is Lay’s biggest sales period, and the big game tends to be big on Twitter, too. It would be crazy for Lay’s to not join the Super Bowl conversation.

LAY'S FOR THE SUPER BOWL! pic.twitter.com/8YXZGnNvEz

French actress Adèle Haenel started the #MerciAdeleHaenel when she walked out of the Césars to protest the awarding of convicted sex offender Roman Polanski. In a show of support, the Twitter account for Portrait of a Lady on Fire, which stars Haenel, tweeted the clip.

If you plan to run Twitter ads, use conversation targeting to get in on the action.

Even if you tweet at peak times, chances are many followers may have missed your tweet. And if it performed well the first time, it likely will again.

Don’t simply Retweet or copy your top performing content. Find creative ways to repackage and re-share what works. Leave enough time and contrast from the original so as not to appear spammy.

The New Yorker’s Twitter account often shares the same article at different times. But they choose a different pull quote or tagline to hook you in each time.

On the stage this spring, Sarah Jessica Parker and Matthew Broderick star in a revival of the 1968 Neil Simon comedy “Plaza Suite."https://t.co/7umuD3lYu4

Off Broadway this spring, Claire Foy and Matt Smith, of “The Crown,” reunite in “Lungs,” Duncan Macmillan’s portrait of a couple deciding whether to bring a child into a world threatened by ecological doom. https://t.co/eb1hzJfo93

When it comes to algorithms, there are no one-size-fits-all solutions. Use Twitter Analytics to track what works and what doesn’t, and tailor these tips for your account accordingly.

Save time managing your Twitter presence by using Hootsuite to share video, schedule posts, and monitor your efforts. Try it free today.