Tumblr is a powerful social network, but only when it’s used right. Learn how you can use Tumblr's ad features to connect with customers.

According to Adobe’s Social Intelligence Report, Tumblr ranked No. 1 in social sentiment towards brands. Not only that, but 70 percent of users say the Tumblr dashboard is their favorite place to spend time online.

With over 200 million active blogs publishing 80 million posts every day on Tumblr, your brand has a huge opportunity to reach an engaged audience. But, that kind of volume means you also need to find ways to stand out from the crowd. Continue reading to find out how you can best advertise on Tumblr to benefit your business and reach new customers.

A guide to advertising on Tumblr marketing

Tumblr’s Sponsored Posts are ads that appear in users’ dashboards but maintain the look and feel of organic content. For example, television network FX developed a Tumblr Sponsored Posts campaign to promote their new show. They created “editorial content including  GIFs, illustrations, and original photography that aligned with the brand’s messaging strategy.”

The campaign was a success, with FX’s follower count increasing by 86 percent and their engagement rate rising to 2.8 percent—32 percent above industry averages.

Sponsored Posts work, as Tumblr explains, because “brands are welcomed as creators themselves with content users want to see.” Sixty percent of users who have seen a Sponsored Post report finding the content fun, engaging, and of high quality. Out of the consumers who have seen a Sponsored Post, 70 percent say they perceive the associated brand more favorably as a result. Over half of the Tumblr audience took action and went on to research the sponsor afterward.

Like advertising options on other social media platforms, Sponsored Posts can be targeted with parameters such as gender, location, and user interests. They can also be syndicated to Yahoo for further visibility and reach.

For added visibility, Sponsored Video Posts play automatically in users’ Tumblr Dashboards and the player accompanies the user as they scroll down the page.

Maynards Canada used Sponsored Video Posts along with regular Sponsored Posts to promote their new line of candy, Maynard Beanz. Along with the videos, the company used the tag #whereyoubeanz to boost awareness and recognition.

The campaign resulted in a 1.6X increase in brand awareness, 10X ad recall, and 2.13X increase purchase intent. Tumblr explained, “Autoplay video engages users even if they scroll past. Maynards’ campaign demonstrates the importance of including video in your advertising campaign to reach users who don’t actively engage with content on their dashboard.”

To use video in your brand’s paid and organic Tumblr marketing efforts:

Tumblr’s Sponsored Day option offers a unique advertising opportunity. According to Tumblr, purchase intent and ad recall was twice as high among users who had seen a Sponsored Day campaign than those in a control group.

With this kind of campaign, Tumblr lets a brand pin their logo and tagline to the top of all users’ dashboards for 24 hours. This links to a tab in the Explore page (one of the most visited pages on the network) where you have free reign to share curated content. As Tumblr explains, “whatever story your brand wants to tell, you’ve got a slice of the Dashboard to tell it in.”

Nike was the first brand to run a Sponsored Day advertising spot as part of its #betterforit campaign promoting a new line of women’s workout gear. David Hayes, Tumblr’s Head of Creative Strategy, explains that with Sponsored Days, “the brand can also curate a whole bunch of content from the community. In [Nike’s] case of women’s fitness, the content can come from the community or the brand’s own blog.”

Our post Tumblr for Business: Advanced Techniques in Content Curation provides more tips and tricks for building effective stories with campaigns and posts.

To access Advertiser Analytics while running a paid campaign, click on the Analytics tab on the right side of your Dashboard. 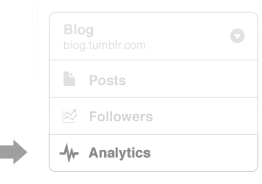 Once in the Advertiser Analytics section, you have access to data such as: 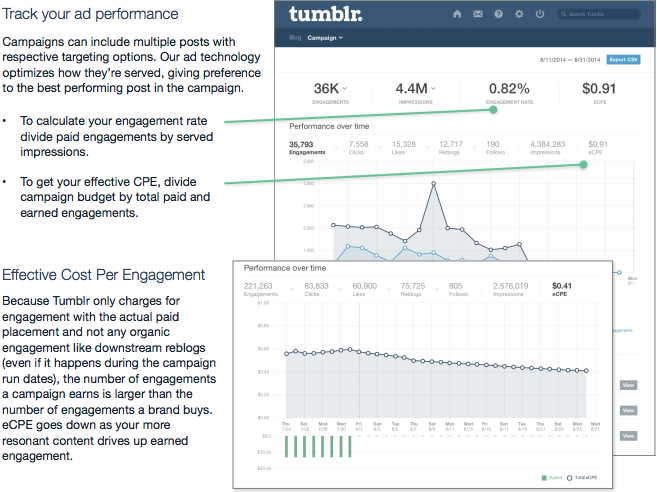 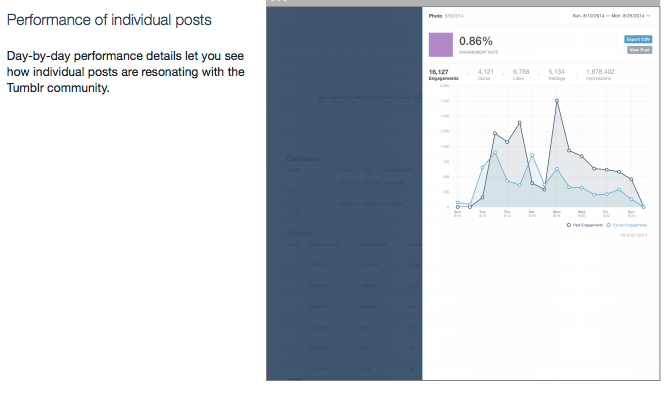 While you can see basic engagement metrics such as likes and reblogs with your organic content, there are currently no in-depth analytics options for unpaid posts or your blog page overall. This is where Google Analytics comes in handy.

For more information on how to use Google Analytics with your Tumblr strategy, see Tumblr’s guide here.

Tumblr is a powerful social network, but only when it’s used right. Focus on your target demographic and build engaging paid and organic content with them in mind.