WeChat users can do everything from posting videos to filing for divorce within the app. It's the largest social network in China.

Wondering how to use WeChat for your business?

The super app is the single largest social network in China, and it’s gaining momentum elsewhere, too.

In China, where the majority of WeChat users live, the platform is known as Weixin.

Weixin was first released as a messaging app in 2011 by parent company Tencent. It quickly grew into an “everything app,” connecting users to gaming, ridesharing, shopping, and even government services, along with friends and family.

WeChat users can now do everything from posting videos to filing for divorce on the app.

They can also synchronize their posts, called “Moments,” with Facebook and Twitter—social networks that are still banned in Mainland China (along with Instagram and YouTube). Nearby competitors include Japan’s Line and South Korea’s Kakao Talk. However, there’s also competition from Whatsapp and Tik Tok.

Many non-Chinese brands have used WeChat’s Mini Programs and platform features to break into the Chinese market. And now that you no longer need a Chinese business license to create an account, more businesses are expected to follow.

So, how does WeChat work? Read on for app stats, WeChat marketing strategies, and more.

Bonus: Download our free, customizable social media calendar template to easily plan and schedule all your content in advance.

WeChat is notoriously guarded when it comes to sharing stats about its users and demographics. We’ve collected the most authoritative figures out there.

How to use WeChat for business

These are just a few of the ways companies can use WeChat for business in China and beyond.

WeChat offers a few types of ads on its platform. Banner ads can be placed at the bottom of articles. Moments ads are similar to in-feed ads placed on Facebook and Instagram.

Since WeChat does not allow links to external platforms, a WeChat Store is a brand’s primary way of obtaining sales through the app.

WeChat Mini Programs are basically apps within the app. Brands can use Mini Programs to offer special promotions, share games, and even recreate apps they offer outside of the platform. For instance, the Chinese bike-share company Mobike has a Mini Program that allows people to rent its bikes without having to leave WeChat.

Creating an Official WeChat Account—also known as a WeChat business account—requires a fair amount of preparation. Our step-by-step guide walks you through the process, offering tips along the way.

3. Choose either Service or Subscription Account. Make sure you review the differences between the two before making your decision. It’s not possible to switch later. 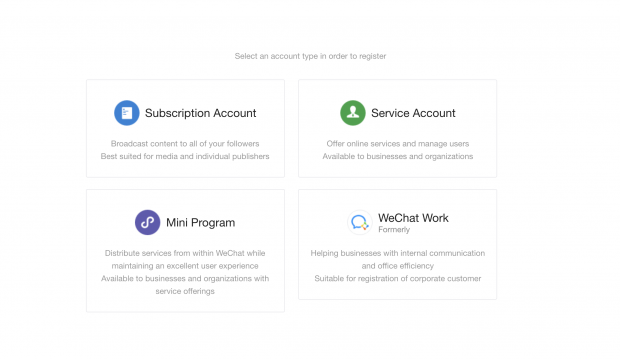 WeChat Service Accounts offer admins more customization and platform features, including opening a WeChat Store and creating Mini Programs. Another benefit is that posts are published as updates in users’ chat lists where they have higher visibility.

4. Complete the basic info form and wait for verification. 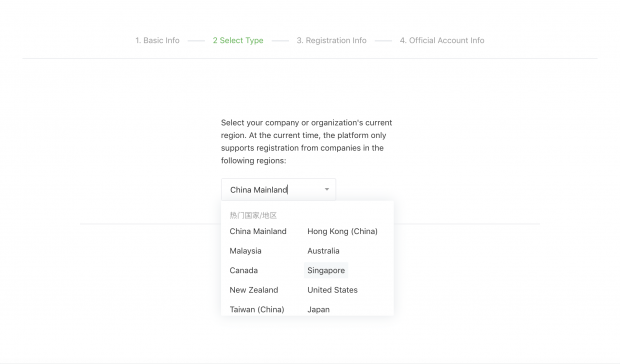 6. Fill in the entity information form. 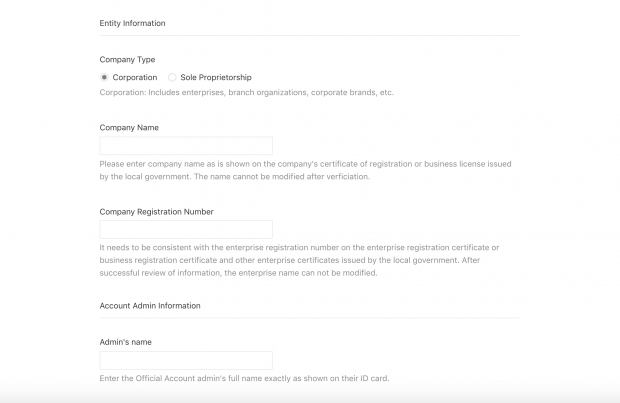 Note: You will need to have a company registration (or business license) number. Make sure the appropriate contact provides this information. The information included here cannot be altered when activating WeChat Pay and other features in the future. 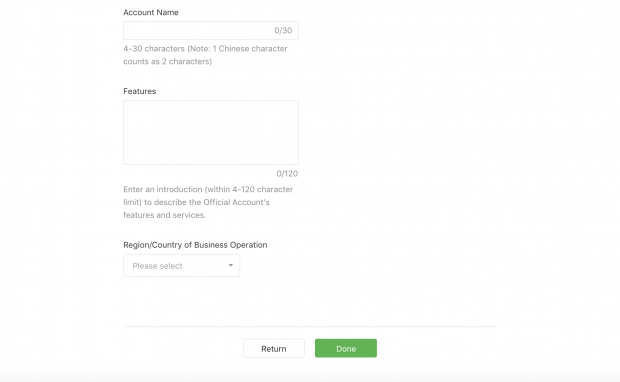 8. Once you have opened your account, apply for verification. You’ll need to provide a completed Verification Letter, Trademark Registration, and other qualifying documents.

Beyond WeChat banner and Moment ads, there are many ways to connect with customers on the platform. Here are six WeChat marketing strategies and several brand examples.

WeChat users can scan QR codes to find users, join, groups and more. And brands have transformed the duo-tone pixelated codes into animated works of art.

Martell Cognac rewards customers’ curiosity with a QR code placed on its website. 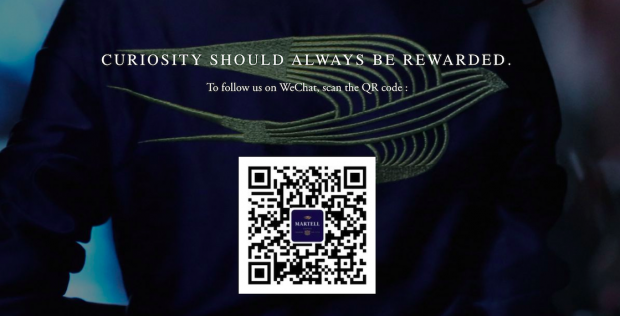 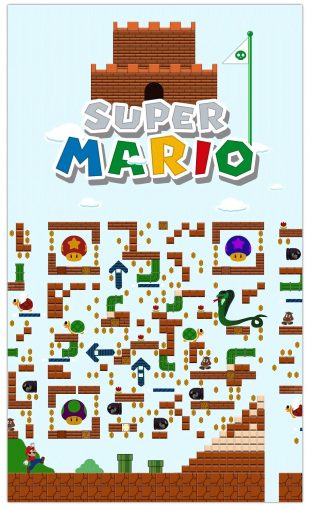 Mobike’s code manages to deliver its brand proposition and a way to connect in a clever animated GIF. 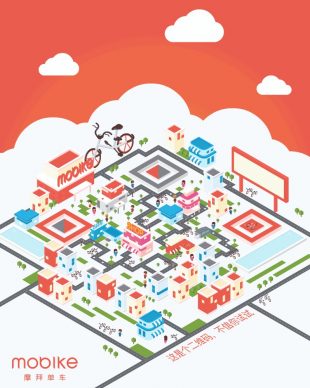 With custom HTML5 campaigns, brands can host unique experiences from their Official WeChat Accounts. Depending on your WeChat marketing objectives, you could create a survey or quiz to customer leads, or an interactive experience that unlocks promo codes of special information.

To promote a pop-up store and sale at Shanghai’s Cha House and its new perfume, French luxury brand Hermès took advantage of WeChat HTML5 by creating a tailored experience. They invited their WeChat followers to click on a GIF and “unwrap” a perfume bottle. After unwrapping, participants could reserve a visit to the pop-up shop.

Bonus: Download our free, customizable social media calendar template to easily plan and schedule all your content in advance.

Get the template now! 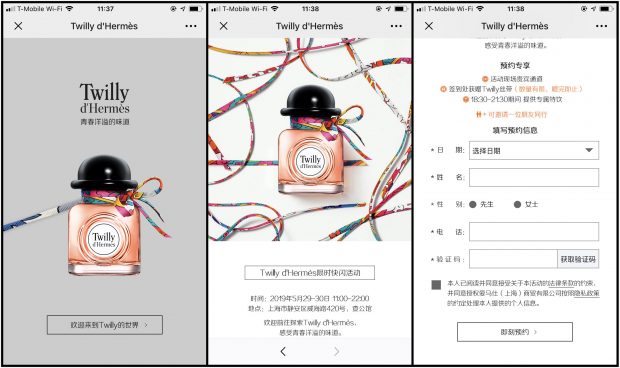 Promote awareness with a branded game

To celebrate the opening of their new office in Shanghai, LxU and xS, created a branded game called Olympig (since 2019 is the year of the pig). Gamers could play three mini-games within the game to rank on the leaderboard.

This could be a fun way to promote products and services, or reinforce brand messaging.

The Olympig Game in the Year of the Pig from LxU Studio on Vimeo.

Partner with WeChat influencers to connect with audiences

One of the best ways to introduce your brand to a new audience is with an influencer, or “key opinion leader.”

Influencers have the trust of local audiences. As content creators, they are often dialled-in to what works with their followers and what doesn’t.

Hailed by her 4.5 million plus followers as the “Goddess of Shopping,” Li has remarkable sway over her audience. Her sponsored WeChat article about Mini Coopers resulted in sales of 100 Mini Cooper Countryman vehicles in under five minutes.

Gucci’s “WhyAre You Scared of Me?” campaign used an artificial intelligence-powered robot as its influencer. The tongue-in-cheek campaign showed that the luxury brand is socially savvy and avant-garde when it comes to technology.

Tell a brand story with a video campaign

In anticipation of the Chinese New Year, skincare brand SK-II took to WeChat to connect daughters with their parents back home.

The “Meet Me Halfway” campaign tapped into the pre-travel anxiety of eight out of 10 single Chinese women, who feel pressured by their parents to get married and start a family whenever they visit home.

On WeChat, the skincare brand used video to tell the stories of three women who wrote letters to ask their parents to meet them halfway, both literally and figuratively. The company also tapped influencers to share their own experiences, encouraging other WeChat users to do the same.

The campaign was one of the most talked about social media initiatives in China, earning 75 million views. 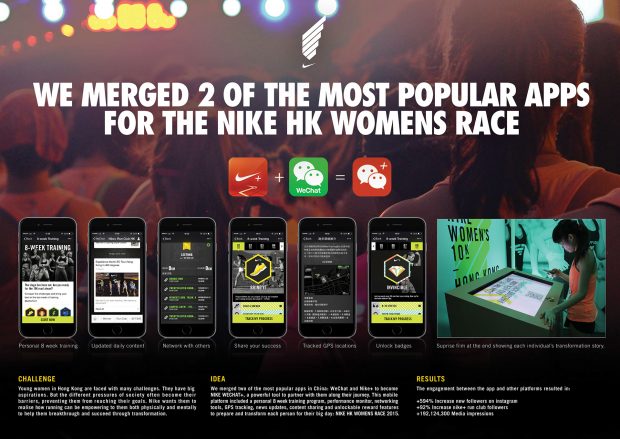 Pro tip: WeChat is the primary social gateway to Chinese audiences. And since most of the platform’s users are based in China, most brands on WeChat are there to reach the Chinese demographic. That means most campaigns are run in Standard Mandarin.

Remember, if you want to reach a new audience, you have to speak their language. Be sure to hire a reputable translator and familiarize yourself with the culture as much as possible.

Send or schedule a photo or text message to your followers on WeChat and respond to their messages from the Hootsuite dashboard. Try it free today.